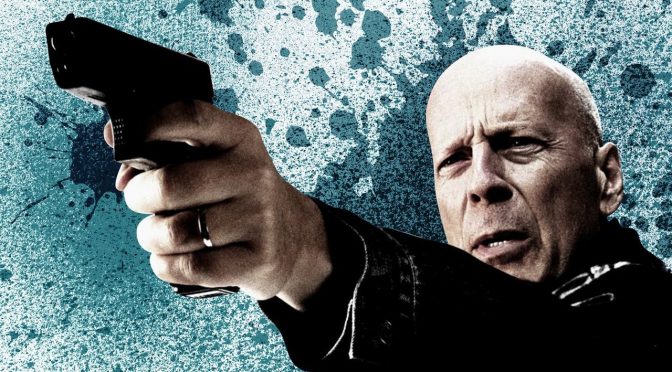 You’d be forgiven for thinking that Eli Roth’s remake of Death Wish by-passed the cinema in England without any fuss, but you’d be wrong. It did do a theatrical run, but you’d probably have to have been psychic to catch it.

Due mainly to the almost incessant controversy over gun ownership in the United States Death Wish’s American theatrical release was hounded by criticism; so it shouldn’t be much of a surprise the UK didn’t get much of a chance to see it on the big screen.

This negativity was generally attributed to its release being somewhat close to a mass shooting, but to be honest it’s a little difficult NOT to release a film around an act of mass violence these days. I think in truth it was obvious that Death Wish was not going to have an easy time regardless, and after viewing the film it’s clear that its makers didn’t care.

For the three people on the planet who don’t know, Death Wish is the story of Paul Kerney, played by Bruce Willis, a surgeon who goes on a vengeance fuelled rampage after his wife is killed and daughter is put in a coma by three men who burgle his home when they believe the family to be away.

There’s little more about the story to say and there little more you need. The story of revenge is probably the oldest tale in the book and to make such a story work all you need are two people and a grudge.

The only other thing a teller of such a tale needs to consider is where they stand on it; and its here that Death Wish found itself in deep water. Death Wish does not moralise about the predicament Paul Kerney finds himself in and outside of a few brief commentaries by radio show hosts within the film it barely acknowledges any moral complexity behind its storyline; and personally I applauded it for this.

In my view many critics were too busy trying to force their own moral code onto the film to see that it did indeed have its own. Critics wanted it to make a comment about gun crime or make objective criticism of vigilantes. Critics wanted the film to show moral complexity and present Paul Kerney as an unjustified man doing more evil in response to the evil done to him.

Death Wish does none of this and because of this its critics thought that it did not take a moral position; or that the position it took was immoral by glorifying Paul’s actions instead of condemning them.

With this I disagree.

Death Wish did take a moral stand; the problem was that the critics wouldn’t see it because they thought there was only one side of the argument to take.

Death Wish’s moral stance is simple to encompass; it’s this.

When no one is there to protect you and those you love, you have the moral authority to do the job yourself.

The simple reason there was no moral ambiguity in Death Wish should be very simple to understand.

It’s because rage has no moral ambiguity: a person in a rage is justified by that rage.

Objectively of course this could be considered deeply objectionable and those on the outside of this rage would no doubt make a moral judgement on it; and of course they’d be correct in doing so. Some of the characters in Death Wish do this, as do many of its critics of course; but they all ignore one thing.

Rage doesn’t care, because it doesn’t need their approval.

Rather than seeing Death Wish as an immoral film glorifying violence I see it as an amoral film that doesn’t care about violence because, in spite of what its critics say, it does have a moral compass is set perfectly and there is only one route to take.

Eli Roth initially seemed a rather unusual choice to remake Death Wish, known principally for films like Hostel and Cabin Fever Roth would not have been many people choice for such a film. But now it seems to me that I couldn’t think of anyone better, he brings a manic exuberance to Kerneys bloodbath that wavers between gaffaws of laughter and cringes of disgust, sometimes both at the same time. Roth goes for the same over the top style those of us who lived through the 80’s remember well and because of this is manages to become its own film and does not provoke constant comparisons to the 1974 adaptation.

Personally I think I enjoyed this version of the story more than the original, and I intend to watch them back to back at some point to test that theory. This may be due to the glossier and more exploitative nature of the remake, or it may be because of Willis’ involvement, but the film was a faster and more kinetic experience that simply didn’t care about the controversy it surely knew it would provoke.

The original of course was a much smaller affair and it had no idea that it would provoke its own controversy, so it may be that if I’d have been a little older and saw the 1974 film on release my opinion would be different.

Either way, I thoroughly enjoyed the 2018 version of Death Wish and I see it as a welcome return to form for both Willis and Roth, as well as – I have to admit – the furore it caused with the critics.

As I’ve said before, we must always remember that critics know nothing and we shouldn’t consider them (and with “them” I mean armchair critics like myself as well) as anything worth listening too with anything approaching reverence.

Death Wish is both an antidote and an attack on such reverence in much the same way as similar films were in the 1980’s and for this alone I would consider it a worthy addition to my collection. But as it’s a Bruce Willis film as well… well that makes it a must buy.

Until next time, please remember what Picasso said…

“Ah, good taste! What a dreadful thing! Taste is the enemy of creativeness.”