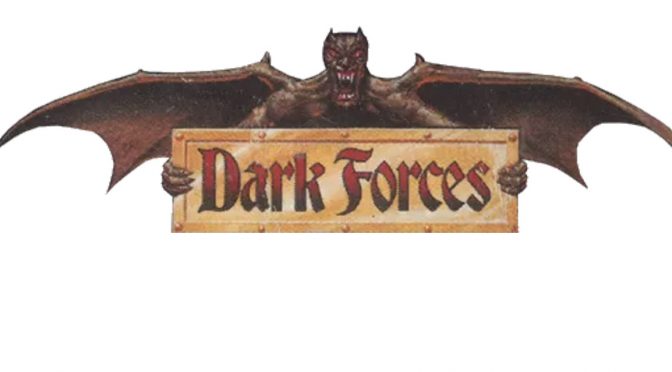 It’s the early 1980’s and Doug is the king of the video arcade, the master of all the pixelated characters he surveys, and he has never met a game more than a match for his skills. Well… That was until his father began working from home and he had access to his own personal arcade machine in the shape of his fathers home computer.

In a strange store in a darkened street Doug finds a retailer who sells just a single game – one called “Beat the Devil” – and the already smitten game enthusiast becomes an obsessive over night.

Author Scott Siegel also wrote another book in the Dark Forces series, The Companion, which was a firm favorite of mine as a teenager, and so Beat the Devil was one high on the list for my attempted re-read of the series. I wasn’t too disappointed by the book, I didn’t enjoy it as much as The Companion (but then I wouldn’t, its hard to compete with nostalgia) but it a solid – though admittedly simple – little story that plays out quite well.

Assuming, of course, that your standards are set accordingly.

What I really did like about this book is that it combines two elements of the age: the birth of home computing and the paranoia this brought with it as well as the “Satanic Panic” craze of the age.
Its a little hard for younger people to completely understand, or even perhaps believe, but during the seventies and early eighties there were a great many people who truly believed that there was a huge underground society of satanic worshippers across the western world.

It was hard to turn on the TV at one point without some primetime talk show exposing (quote, unquote) the satanic underground in some earnest. Big names of the time did exposes on it and more than a few people went to prison for their supposed connection with such groups.

In its very small way Beat the Devil may be alluding to this paranoia, it does take the stance that Satan is real and actively taking a personal interest in your children at the very least. These days the book comes across as naive and simplistic but I can imagine that when it was published, back in 1983, it would’ve been accepted by its teen audience in a very different way.

Of course this wasn’t all of it; by ’83 we had just seen the movie TRON and ELECTRIC DREAMS was just around the corner so this was very much the popularization of the home computer age and a great many people were already concerned with having these “thinking machines” in their homes.

This all seems terribly naïve by todays standards, I know but the early 1980’s was a huge tectonic shift in culture and the youth of the day, people just like myself as well as the books main protagonist Doug were at the very heart of it.

For me this all gave Beat The Devil a resonance that I’m sure many people will not see, perhaps I’m reading that resonance into the book in fact but regardless I still think that for all its faults it stumbles on something timely and attempts to portray with some honestly what it was like to be caught up in this technological shift.
Ultimately the idea that Scott Siegel creates is far better than the actual book he wrote. I really don’t think this was through any lack of talent but because of the limitations of a young adult audience that were far less sophisticated than the ones of today. Well, I say this but perhaps young adult books back then were actually read by young adults; I think it very likely that most of their audience these days are probably way too long-in-the-tooth to actually pass for “young”.

Ahem, some of us notwithstanding of course.

Beat The Devil does leave me with the feeling that I read a curious time capsule rather than a young adult novel. I couldn’t help but reminisce about my own life in the early 80’s, things moved pretty fast during those years, moving from the simple vector graphics of Asteroids and Tempest arcade machines to playing Manic Minor and the god-awful Chiller on my Amstrad CPC in just a couple of years.

Not once during this time did I ever had to play against the Devil for my immortal soul, I assure you, but I can relate somewhat to Doug’s obsessiveness regarding this curious new thing called “The Computer Game” and I can’t help but think that if I had found a copy of Beat The Devil for the old Amstrad CPC I’d have probably spent an unhealthy amount of time playing it.

Occasionally I still wake up to this day from the Jet Set Willy nightmare I suffered as a child and honestly… That’s no where near as funny or pervy as it might sound.

I’d be trapped between two huge glass panels, always running forward, never allowed to turn back. I would leap over pits and dodge snakes. Through the glass I could see a huge face bathed in reflected light from the screen in which I was trapped and this monster would push me forward, onward and onward until I was impaled on a spike or crushed by some nightmare creature and I had to start it all over again.

Night after night I had this dream, and it was only when I was much older that I realized the horrible face half hidden in the darkness was my own.

Come to think of it, playing Beat The Devil might have come as a bit of light relief after Jet Set Willy.