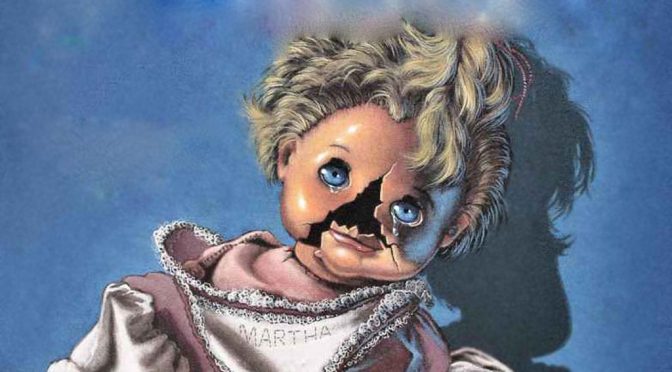 The first book by Elizabeth Engstrom, originally printed way back in 1985 but re-released through Valencourt Press as part of their Paperbacks From Hell series, consists of two novellas “When Darkness Loves US” and “Beauty Is…” and is a relatively modest size at 250 odd pages. The stories themselves are somewhat connected, in theme and construction if not in plot or story, and stylistically they do well to evoke a sense of timelessness uncommon to such novels. The book is presented as pulp horror but both stories struggle to actually fit the category in real terms. Neither of the stories are scary in any way, neither story exhibits any real horror but they are both extremely well written and recommended regardless.

The first novella, Where Darkness Loves Us, follows a girl named Sally-Ann who is the young wife of a farmer. Dizzy on fantasies of her life to-be she explores the fields around her home and finds stout wooden doors in the earth which leads to underground caverns. Foolishly she enters and when the doors are accidentally closed on her finds herself lost in the darkness.

As time moves on she begins to see the apparition of a long lost love who guides her, an apparition that is the only light in the darkness; and she begins the feel the swelling of new life inside her.

The novella When Darkness Loves Us is a quick read that has bundles of character and atmosphere those blossoms to something like a family drama as told by the Sawyer family from Texas Chainsaw Massacre. There’s plenty of low end suspense to be had but there’s little in the way of a “pay off” to this suspense. I suppose I felt the book was undermined by the characters own stupidity and the unlikeliness of the scenario itself, neither are deal breakers but coupled with the lack of any big-bad (to coin a Buffyism) the makes the whole affair a bit horror-lite. Thankfully the drama itself is more than enough to keep things afloat and provide dramatic suspense.

For me When Darkness Loves Us is a bit of a weird mixed bag, it’s a fast read and I was eager to find out how it ended but it wasn’t a horror story and the characters struck me a little as clichés. There were lots in it that left me cold, nothing I didn’t like as such just stuff that filled the page without having much of an impact on me.

Most reviews of this novella are glowing, they talk of it leaving the reader “reeling” over it, but I was left with a different result from the novella. It was good, yes, very good in fact but it lacked purpose or meaning to me; and for such a slow burner that relies so much on atmosphere this ultimately left it an extremely pretty but somewhat empty experience.

Perhaps this one will grow on me with another read through, and I probably will do just that at some point.

The second novella in the book Beauty Is… improves on things quite a bit. This time the story is much more involved and the characters are more fleshed out. It takes some of the themes from Where Darkness Loves Us and elaborates on them, refining them into a much more accomplished tale.

Beauty Is… introduces us to Martha Mannes, an old lady who lives on the edge of a small town. She is well treated by the townsfolk and in many ways her existence is as idyllic as it could be. You see Martha is not only old she has severe learning difficulties, and if this wasn’t enough of a burden to her she was also born without a nose.

Despite all this the townsfolk treat her like an honored member of their community, the bank hands her money on demand and the store owners hand-hold her through all her purchases. One day while a local handyman is helping fix her chicken coop she discovers and unfamiliar feeling towards the young man, a feeling that seems oddly reciprocated; and over the coming months as their relationship grows Martha’s mind is filled with more and more unfamiliar ideas and feelings, until a remarkable transformation slowly occurs.

Beauty Is… shares themes of loneliness and love with the previous novella but it manages to create an experience far more complete and rewarding. As Martha grows we are treated to a series of flashbacks where we see her parents from the moment the newlyweds enter their new home to the point her mother dies. In this we are treated to a tale within a tale that both elucidates the drama and tragedy of Martha’s life as well as introduces one formative mystery of her existence.

Beauty Is… is a tale of the struggles passed down from mother to daughter, it is a tale of faith and guilt and the power of self belief and in all this its more universal than the previous novella in this small collection; it was not a surprise to me that the novella had been optioned to be made into a movie, but it was a surprise that it never has been.

On the strengths of this small collection Elizabeth Engstrom is certianly a writer worth the effort and though I think categorizing it as “horror” isn’t entirely accurate its probably about as accurate as any other category you could put it in. Engstrom is much like Stephen King in this regard, much of his work is definitely not horror, but the genre is flexible and diverse enough that most of its enthusiasts will embrace anything that doesn’t quite fit anywhere else.