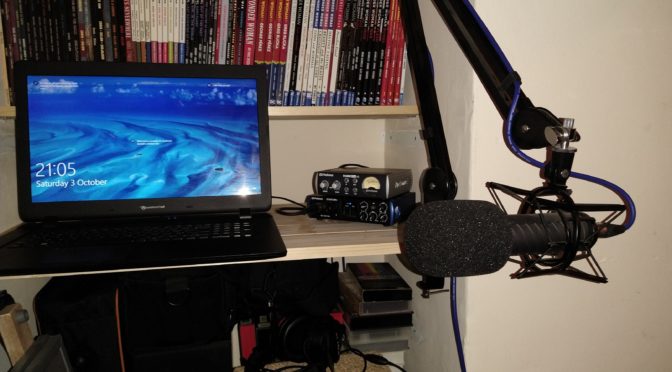 For a while I was doing Youtube videos, so I had a pretty good setup running in a little studio I had created for the purpose. It consisted of a Yamaha mixer and a Rode mic with a nice little pre-amp to give it a bit of warmth.

It worked well, but the videos themselves got little traction and though I occasionally still do them the time spent was better spent elsewhere.

So the studio was dismantled and the space was repurposed for other – more important – uses.

But the equipment remained.

But then I was thinking of things I could do to perhaps promote the writing a little more and I remembered a person who read much of my work on a blog I once ran. He mentioned doing an audiobook…

So here I am breaking out those mics, and pre-amps (though I’ve purchased a new mixer) and I’m recording again. I’m not sure how long its going to take, it might be a while, but I’m in no rush. I write on some days and record on others, work in my day job here and sleep a little there, knowing that at some point in the future I’ll add another arrow to my quiver in the form of my very own audiobook.

In for a penny, in for a pound…

posted by Alan Preece
on October, 07