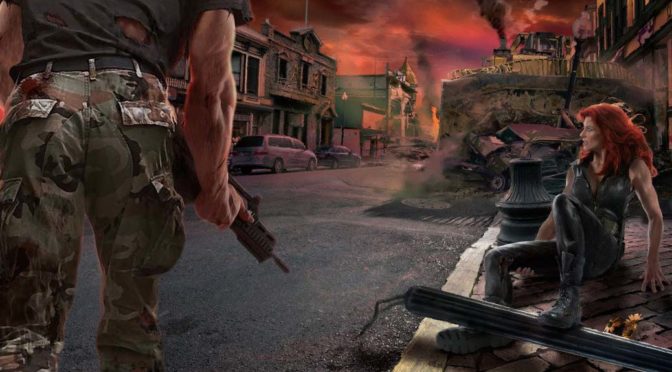 Anyone who has ever played one of the popular Fallout games will recognise the world presented in Deathlands: Pilgrimage to Hell (written by Christopher Lowder and Laurence James under the name Jack Adrian). I’d go as far as to say they’d feel quite at home there.

A hundred years after a global nuclear war the world has settled into a place without borders, where land is separated into places you can live and places where the acid rains would sear your flesh from your bones.

In the continent that was once called North America no trace of government remains. There are no cities to speak of and what infrastructure remains is maintained by a series of feudal lords that called themselves “Barons”. These violent and disturbed men carve up the land between them and lord over them with iron fists, guarding their land jealously.

Across this land travels The Trader, a Baron in his own right, but a baron of a mobile city that moved from village to village trading goods and skills with the survivors.

The Trader is no hero, this was no longer a land for heroes, but he was a man with a code, and all those who worked with him shared his code. One such man was Ryan, a battered man running from some undisclosed pursuer, who served as The Traders lead war council.

After many years trading and travelling across the desolate wasteland Ryan happens upon a young flame-haired woman who insists on there being a hidden land of plenty hidden in the Badlands. Ryan had heard these tales before, but later – when he hears a very similar story from an aged actor – he becomes intrigued and begins looking deeper.

Deathlands: Pilgrimage to Hell could easily be dismissed as just another Mad Max clone, and this would not be entirely unfair, but there is more to the book. It is undoubtedly a direct response to the movie Mad Max 2 (known as The Road Warrior in the US), but as the story unfolds and we finally find the “promised land” in the shape of The Redoubt.

Here we discover something that Hollywood would later repurpose into the main plot element of the film Stargate (some ten years later) as well as containing underground complexes that gamers would recognise from Fallout (which was some six years later).

There’s not a lot of plot to Pilgrimage to Hell, but then there rarely is to stories set in a post-apocalyptic world. These tend to be stories of survival and conflict set against extreme violence and deprivation.

But it’s best not to confuse plot and story with such novels. The plots may all follow a very similar pattern but the stories, they can be as diverse as any novel.

Can be, not that they are always of course.

With the addition of The Redoubt, a system of instant teleportation across the continental US, the topography of the Deathlands becomes a whole new interesting place. It promises stories set across extremely diverse cultures derived from hundreds of years of evolution from the cultures of today.

As a “set up” for future books (of which there are many, but more on that a little later) Pilgrimage to Hell works extremely well, but does it as a stand-alone novel?

This is a difficult thing to ascertain. This kind of book is rather niche. Its unapologetically “masculine” in its approach, burly men carrying a dizzying array of firearms – many of them meticulously described – while dispatching foes in undeniably gruesome ways, but it also has some moments of human interaction that come as a bit of a surprise.

When Ryan meets the flame haired woman – who we learn is called Krysty (that’s not a typo) – a romance blossoms, and the reader not only has to steel themselves to some steamy scenes but some surprising tenderness from our anti-hero.

This all comes after a few hundred pages of ultra-violence, tolchokery and devotchka chasing, so don’t expect the tenderness to come without a price.

(And if those words meant nothing to you, well…)

If you like the Mad Max movies, or you eagerly await the next Fallout then you should probably seek out a copy of Deathlands: Pilgrimage to Hell. They’re available easily enough online, but none of the books ever got a release in the UK. I particularly enjoyed the audio release, presented by a company called Graphic Audio. It was a full cast dramatization that stuck very closely to the written word, making it a full nine-hour long audio play.

I have the next three books on my shelf to read, but – to be perfectly honest – I’ll probably forego reading them if I can find the Graphic Audio presentations instead.

Deathlands is a long running series that consists of a staggering 125 books (and a further sixteen audio-only episodes), and a spin-off series called The Outlanders.

I don’t know how far I’m going to get through these 125 books, but as I’m already halfway through the second book (Deathlands: Red Holocaust) I wouldn’t be surprised if there’s a fair few of them on my shelf by the end of the year.

Be warned though, Deathlands books are pretty extreme in their depictions of violence so if you’re a “trigger warning” kind of person just assumed they have every trigger warning you can think of printed in fluorescent red on their covers.