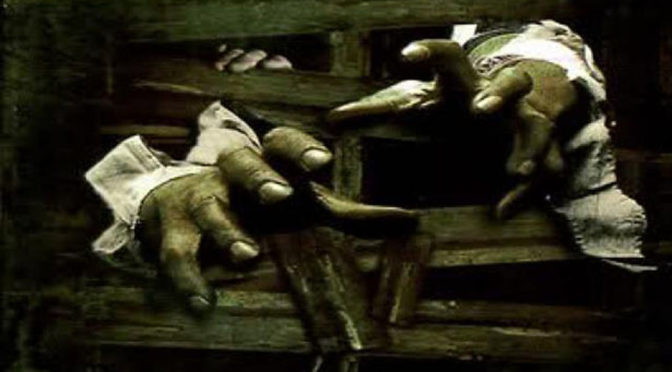 For reasons I won’t go into I stopped reading books back in the late 1990’s and resumed reading them in 2017, the stresses of life during those twenty-seven or so years giving me little time to sit back and disappear into a book.

When I did start reading again (after buying one of those little eletronic book-type thingies) I started researching on what I had missed, and this I did by the obligatory internet seach-engines with something like “the best horror novels of the 90’s”.

Eventually I came across a writer called Brian Keene, apparently a famous fella, and I selected a book pretty much at random from the cheaper end of the e-book spectrum; which turned out to be called “The Rising”, later I found the book in an audio format (narrated by Joe Hempel) and took the plunge.

Now I’m a horror fan, and I have been since a nine year old me watched Dawn of the Dead and a ten year old me watched Alien. By the time I was fifteen I had thousands of videocassettes (remember those?) and I have probably seen a fair few hundred zombie movies, so I’m pretty much zombied-out; or at least I thought I was.

The Rising is the book equivilent of Jaume Balagueró’s REC, pre-dating that film by about three years, setting the walking dead amidst a decidedly religious themed apocalypse that effectively changes all the rules we’ve been used to regarding the living dead.

Which for me was a welcome change.

These zombies talk and drive, work in teams and hatch plans that hint at an even darker truth behind it all that our heroes can barely guess at. Through this story we follow pockets of survivors, each with thier own mission, as they gradually converge on a rogue military base and the mad commander that runs it.

Theres a good amount of action on-hand and more than a little gore that spurs the reader on into a densely packed world that moves at an enviable pace across half of middle America; but thankfully we are in good hands with Joe Hempel as our narrator, who keeps things snappy and does not impede the books pacing.

As I hit the final minutes of the book I was already seaching for the second book in the series, purchasing it and downloading it as the final seconds of the first story rolled by and I’m certain that this sequel, City of the Dead, will not be the last Brian Keene book I’ll be working through over the coming months.

Even if you’re zombied-out as I was, this one might just make you revisit those lovable cadavers and their overly enthusiatic hickey’s; really, all they want is some affection.